Everything You Need to Know About the Birth of Hockey’s Newest Expansion Franchise
Posted on July 18, 2016 by Connor Sprague

If you’re wondering how exactly the NHL ended up in Las Vegas, it all starts with Bill Foley. Bill Foley is a top-level executive for Fidelity National Financial who has been pushing for a Las Vegas sports franchise for quite a long time. Rumors have been circulating for years about the possible relocation of an NBA or NFL team, so it is a little surprising that the franchise Foley finally landed was an NHL team. The question is, why after years of lobbying, did a big four sports franchise finally decide to take up residence in Sin City? Well, let’s let Kevin Costner answer that one for you. 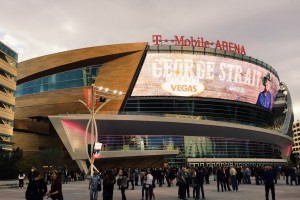 “Build it and they will come.”

The consistent problem Foley had in his big time recruiting project was the lack of a feasible stadium for a new team to play in. He decided to solve that problem and build one. The $375 million project was funded by MGM Resorts International and Anschutz Entertainment Group and began on May 1, 2014.   Construction of the stadium, on an empty tract of land behind the New York-New York and Monte Carlo resorts, finished on April 6, 2016. No expense was spared in the construction of the arena and the superior quality of the stadium reflects its meticulous design.

T-Mobile Arena is a state-of-the-art facility featuring the most advanced technology and a world-class design. The building is constructed to highlight the best parts of the Las Vegas area. The front of the building reflects the glitz and glamour of the Strip, while the back of the arena is filled with deep purples, blues and reds to evoke the picturesque desert sunsets. Despite its grandeur, the arena still maintains respect for the beautiful natural setting that surrounds the city. The U.S. Green Building Council even gave the arena a Gold Certification for its environmentally conscious design. In January 2016, T-Mobile bought the rights to the 20,000-seat arena and off the bid for an NHL expansion team went.

Featuring the Ultimate in Entertainment

Foley now had his stadium but he was still missing his sports franchise. Luckily, he didn’t have to wait long. The NHL approved the Las Vegas expansion request on June 22, 2016. Even prior to the bid’s approval, Las Vegas showed that it would welcome a sports team with open arms – the arena sold over 10,000 potential season tickets. Unfortunately for the excited citizens of Las Vegas the hockey team will not be moving into T-Mobile Arena until 2017-2018. But don’t worry… In the meantime, sports fans can watch a plethora of supremely entertaining events. Already, T-Mobile Arena has hosted A-Listers like Billy Joel and George Strait as well as a big-time boxing match between Amir Khan and Canelo Alvarez. Looking a little further along this year, the Professional Bull Riding Finals will be held in T-Mobile Arena along with the Pac-12 Basketball Championships, many Ultimate Fighting Championship events and concerts from everyone from Garth Brooks to Gwen Stefani. 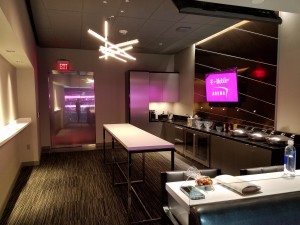 Top of the Line Luxury Suites

T-Mobile Arena’s luxury suites are not only the newest in the entertainment industry, but also some of the finest. The suites are located above the lower bowl and provide the best sightlines to the ice rink or stage. Additionally, suites contain HDTV’s to keep up with all the action, both live and on replay. Suite furnishings are of outstanding quality and offer a comfortable space to enjoy any event as well as entertain clients and guests. Customizable catering plans filled with the best options in game day fare can be purchased for an additional cost. A luxury suite comes with 12 tickets, the option to purchase an additional 4 tickets (a total of 16 tickets), 3 VIP Parking Passes and complimentary access to all of the arena’s VIP private lounges and clubs. As an added bonus, suite attendees get to access the arena through an exclusive VIP entrance. If you’re interested in attending an event at T-Mobile Arena in a luxury suite please contact us at our website:

Check out the full calendar at:

The 2015-16 NHL season concluded with the Pittsburgh Penguins raising their second Stanley Cup in the last eight years. Although ice surfaces around the league will soon be melted for summer, June offers an exciting preview of the season to come.

The Pepsi Center in Denver, CO gets ready to host another regular season of Colorado Avalanche hockey.

Here’s a look at five storylines to keep an eye on for the upcoming 2016-17 NHL season:

18 year old phenom, Auston Matthews, is a lock to be the first overall pick by the Toronto Maple Leafs in the 2016 NHL Entry draft. Matthews is a touted, franchise prospect whose size, skill and versatility compares to Blackhawks star, Jonathan Toews. Will Matthews be able to revitalize a lethargic Toronto franchise? All eyes will be on him as he tries to live up to his big-time billing.

The question is when, not if, the NHL will expand to Las Vegas. 2016-17 should be the year in which the NHL decides exactly when an expansion draft will take place. Where will the team play and what will they be named? Expansion into a non-traditional market will certainly be a test for the NHL – it will be interesting to follow this development.

Outdoor games are a fantastic hockey experience for fans and players alike, connecting the professional game back to its roots on the pond. Annually one of the hockey’s biggest attractions, the NHL will host multiple outdoor games in 2016-17:

Connor McDavid, touted as a once-in-a-generation-player, saw his rookie season cut short with injury. Nonetheless, the rookie forward posted an astonishing 48 points in 45 games. Can McDavid remain healthy for a full season? McDavid is can’t miss television with hall-of-fame potential.

Free Agent forward, Steven Stamkos, will hit the Free Agent market on July 1st. Stamkos possesses the talent to singlehandedly alter the balance of power in the league depending on where he signs. The two time 50 goal scorer will command a massive contract. Rumors have linked Stamkos to the Buffalo Sabres, Detroit Red Wings and Toronto Maple Leafs.

NHL fans, don’t miss out on these exciting opportunities in 2016-17. Please contact us to book or click here if you’d like to view fantastic suite opportunities for the upcoming NHL season. SEG retains the largest suite inventory for NHL games. We are pleased to assist you with all your suite needs.