Sell Your Nets Suite With Us
UPDATING...

How much do Brooklyn Nets suites cost?

Brooklyn Nets suite prices will start at $5,000 for a nightly rently for most regular season games. Nets luxury box prices vary based on the opponent, day of the week, and suite location and size. Mid-week Nets games tend to be the most expensive, as are those being played against premium opponents.
Learn More About Suite Pricing

How many guests can fit in a Nets suite?

Suites at the Barclays Center for Brooklyn Nets games can accommodate groups of 8-70 people. The most common size will hold 16 guests. Both the A-Level and B-Level Luxury Suites come with tickets dedicated to both the fixed stadium-style seats and barstool seats within your private luxury box.

The A-Level Suites at the Barclays Center put you and your guests just 25 rows from the floor. Enjoy premium in-suite catering options and sit comfortably from the private suite balcony to watch the event. Nets A-Level Suites will hold 8-27 guests. Barclays Center suite guests can enter the arena through the Qatar Airway VIP Entrance for smoother entry. Each suite will also come with a dedicated suite attendant to assist you on the day of your event.

To book an A-Level Luxury Suite

Every B-Level Luxury Suite at the Barclays Center offers a sideline view to the event. B-Level Suites are located directly above the A-Level. The Nets suites on the B-Level will accommodate groups of 8-16 people. Barclays Center suites offer premium in-suite catering options, comfortable leather chairs and spacious interiors to mingle with your guests. Private entry into the Barclays Center is available for all guests through the Qatar Airways VIP Entrance.

To book a B-Level Luxury Suite

With over 9 subway lines, surrounding Parking Garages and the LIRR, Barclays Center is extremely accessible for Nets fans. Most Brooklyn Nets luxury suites will not include any parking passes. Barclays Center also has dedicated ride-share pick-up/drop-off points near the VIP Entrance.

Children under 34" tall do not require a separate ticket for admission to Barclays Center. Any child taller will need a ticket even if a parent is in a Nets suite. Nets luxury boxes can provide a private and safe environment for families with children. Strollers are permitted in the suites.

Will my Brooklyn Nets luxury suite be completely private to me and my group?

Yes, all Brooklyn Nets luxury suites are completely private when purchased through SEG.

How will food and beverage be delivered to my luxury box?

This year, all food and beverages will be pre-packaged and will be delivered by Barclay's Center personnel wearing PPE.

Who should I contact if there is an issue with my suite?

SEG or your on-site suite attendant will be able to assist you with any issues with your luxury suite.

Boasting another stacked roster that might rank as the NBA’s best, the only team that could stop the Nets again are themselves. Untimely injuries derailed Brooklyn’s quest for a title as they bowed out to the eventual champion Milwaukee Bucks in the Eastern Conference Semifinals. For the first time in three seasons, Kevin Durant returns fully healthy and has his sights set on another scoring title. Triple-double machine James Harden, Blake Griffin, and Kyrie Irving (eventually) provide a plethora of options for head coach Steve Nash. The addition of longtime San Antonio Spurs point guard Patty Mills adds depth and LaMarcus Aldridge is one of the NBA’s feel-good stories after the 7-time all-star was medically cleared to return after an irregular heart issue led him to prematurely retire back in April. Sitting courtside near that star-studded roster, just one of the many premium... MORE

Boasting another stacked roster that might rank as the NBA’s best, the only team that could stop the Nets again are themselves. Untimely injuries derailed Brooklyn’s quest for a title as they bowed out to the eventual champion Milwaukee Bucks in the Eastern Conference Semifinals. For the first time in three seasons, Kevin Durant returns fully healthy and has his sights set on another scoring title. Triple-double machine James Harden, Blake Griffin, and Kyrie Irving (eventually) provide a plethora of options for head coach Steve Nash. The addition of longtime San Antonio Spurs point guard Patty Mills adds depth and LaMarcus Aldridge is one of the NBA’s feel-good stories after the 7-time all-star was medically cleared to return after an irregular heart issue led him to prematurely retire back in April. Sitting courtside near that star-studded roster, just one of the many premium options at Barclays. Looking for something more luxurious? Traditional suites featuring high-end catering offer a perfect view just 25 rows above the floor. Loge boxes also provide an unparalleled look at the action and include all-inclusive premium food, non-alcoholic drinks, and world-class service from the Disney-trained staff of the Barclays Center.

Star power and championship aspirations have made the Brooklyn Nets one of the NBA’s must-see teams. With MVPs Kevin Durant and James Harden and All-NBA guard Kyrie Irving, the Nets have three of the most dynamic and entertaining scorers in the NBA. Add in sharp-shooting Joe Harris and ferocious finishers Blake Griffin and Jeff Green and it’s a highlight waiting to happen at Barclays Center. Hall of Famer Steve Nash is at the helm as the head coach for one of the best shows in sports.

The premium experience at Barclays Center is one of a kind. Luxury suites will include 10-16 tickets, VIP parking and upscale in-suite catering options. Barclays Center has two suite levels, the A and B Levels. Both Nets suite options feature plush balcony seating, lounge seating inside, a kitchenette and HDTVs.

The Brooklyn Nets were busy this offseason, but the full benefit of their big moves won’t pay off until 2020-21.

Don’t discount this season, however. A group that was projected to be a losing team won 42 games and made the playoffs in 2018-19.

Kyrie Irving, hoping from a fresh start from his turbulent tenure in Boston, was traded to Brooklyn for D’Angelo Russell. Taurean Prince, Garrett Temple, and Wilson Chandler are also new to the team, while Caris LeVert, Joe Harris, and Spencer Dinwiddie return after having success during last year’s overachieving season.

Not to forget the biggest acquisition of all – Kevin Durant. Unfortunately, Durant is expected to miss all of this season as he recovers from an Achilles injury suffered during last year’s NBA Finals while he was with Golden State. When he returns, adding a 10-time All-Star and two-time NBA Finals MVP to the mix will make the Nets the likely favorite out of the Eastern Conference.

Lockdown a premium experience to catch the new-look Nets at the Barclays Center this season. It all starts with courtside seats. Grab a first- or second-row view, and you also get your own private entrance to the arena, and access to the brand new Diamond Lounge – an exclusive club where you can enjoy an upscale, complimentary buffet.

You can also enjoy a traditional suite experience but much closer to the action in the Grant Thornton Loge Box, located just 15 rows off the floor. 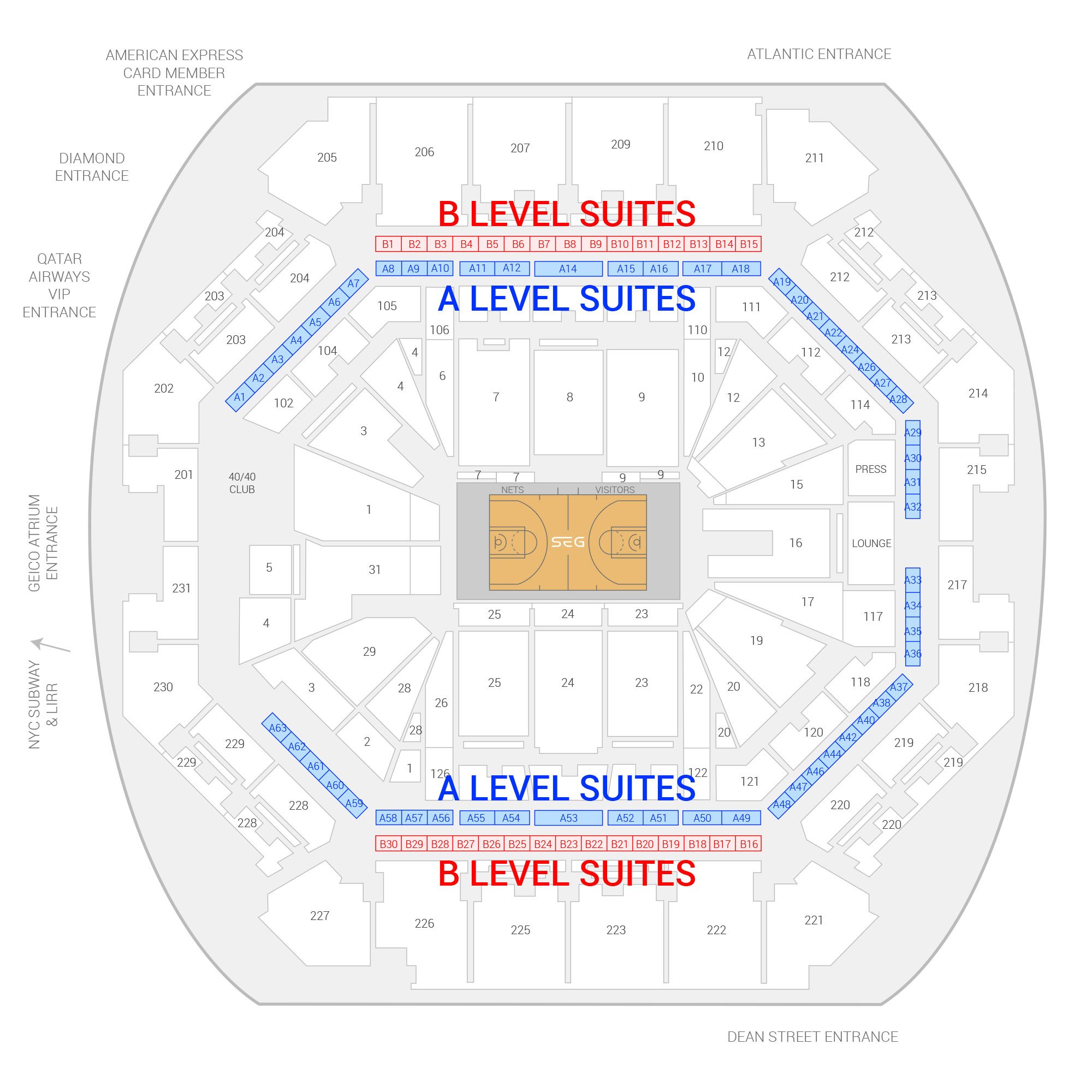 Thank you for signing up for specials at Barclays Center.

Enter your email address below to stay in touch. We'll sign you up for our newsletter, which will inform you of the latest inventory and events at Barclays Center. We promise we will never sell or distribute your information.