How much do Vancouver Canucks suites cost?

How many guests can fit in a Canucks suite?

There are several suite sizes available for single night rentals at Rogers Arena, and can accommodate groups between 12 - 34 in size. Additional standing room only (SRO) tickets can be purchased for some of the suite configurations.

To book an Executive 200 Level Suite

To book a Penthouse 500 Level Suite

The Legends Suite is a large private group space located on the TD Executive Level. This space can accommodate groups up to 48. All suites at Rogers Arena feature upscale furnishings, HDTV's, and an assortment of lounge style seating.

Vancouver Canucks suites can catered with food and drinks in advance at an additional cost. The Canucks suite menu includes inspired cuisine and premium beverage selections. On average, most guests spend around $90 per person for food and alcohol. There is no minimum and catering is optional.
View More Details
×
Catering Details

Following a suite purchase, you will be provided with the suite menu and necessary order forms to complete your order. A pre-order deadline is typically one week prior to the date of your event. You won't be charged for what you ordered until day of the event. If needed, you can also order food and drinks from the suite through your suite attendant.

Parking for a Vancouver Canucks game is easily accessible via public transportation; the closest SkyTrain station is Stadium/Chinatown. Cash lots surrounding the arena include: Rogers Arena Parkade, Stadium Lot 1763, 688 Abbott-The Firenze and BC Place Stadium. The Parkade is most recommended.

Vancouver Canucks luxury suites cost between $3,000-$8,000 USD on average. A Canucks suite varies in price based on the opponent, day of the week and suite location. Suite guests should also include the additional cost of food and beverage in their Canucks suite budget calculations.

There is no formal dress code for Vancouver Canucks Executive Suites at Rogers Arena. All Canucks luxury boxes are climate-controlled and come equipped with a full coat closet. For a corporate event, guests typically business casual attire. However, most suite guests wear Canucks fan gear.

Vancouver Canucks suite guests must adhere to the venue bag policy. Purses or bags larger than 14” x 14” x 6” (35cm x 35cm x 15cm) will not be allowed in Rogers Arena. Guests will be required to return non-conforming bags to vehicles or another secure area prior to admittance to Rogers Arena.

Canucks Executive Suite ticket holders may use any entrance but are encouraged to use the VIP entrances at Gate 1(off Dunsmuir Street Viaduct) or Gate 10(off Expo Blvd.). For guests with disabilities, Gate 16(formerly Gate 5), located off Pat Quinn Way, is the designated pick-up and drop-off area.

Vancouver Canucks luxury suite guests must adhere to Rogers Arena's child ticket policy, which states that children under 36″ tall do not require a dedicated ticket to enter the arena. Children over 36″ will require a separate ticket. That applies to everyone in a Canucks luxury box as well.

The Canucks, in the middle of a tough division with the other Western Canada teams, are hoping a full season under veteran head coach Bruce Boudreaux will return the club to its former levels of success. A lot also rides on the shoulders of 26-year-old goaltender Thatcher Demko, who played 64 games last year but tired a bit toward the end. Vancouver also improved from 23rd defensively to fifth under Boudreau, and a healthy Tucker Poolman should keep the defensive unit strong. J.T. Miller carries the offense with newcomers Ilya Mikheyev (Toronto) and Andrei Kuzmenko (KHL’s St. Petersburg).

Luxury suites at Rogers Arena are located on three different levels of the venue—200, 400, and 500 levels. The Legends Suite, Center Ice Party Suite, and SportsBar Suite come with $1,000 in food and beverage credit. Penthouse Suites on the 500 level hold between... MORE

The Canucks, in the middle of a tough division with the other Western Canada teams, are hoping a full season under veteran head coach Bruce Boudreaux will return the club to its former levels of success. A lot also rides on the shoulders of 26-year-old goaltender Thatcher Demko, who played 64 games last year but tired a bit toward the end. Vancouver also improved from 23rd defensively to fifth under Boudreau, and a healthy Tucker Poolman should keep the defensive unit strong. J.T. Miller carries the offense with newcomers Ilya Mikheyev (Toronto) and Andrei Kuzmenko (KHL’s St. Petersburg).

Luxury suites at Rogers Arena are located on three different levels of the venue—200, 400, and 500 levels. The Legends Suite, Center Ice Party Suite, and SportsBar Suite come with $1,000 in food and beverage credit. Penthouse Suites on the 500 level hold between 12 and 30 fans and provide a bird’s eye view of the action.

In a case of absolutely better late than never, the Canucks locked down two of their future cornerstones at the 11th hour. Top line center Elias Pettersson and defenseman Quinn Hughes signed a three-year and six-year-deal respectively at the beginning of October. The No. 5 overall draft pick in 2017 Pettersson missed the final 30 games of last season, but hopes to regain his trajectory as one of the league’s most promising young talents. Meanwhile, the 22-year-old Hughes recorded 97 points in his first 129 games in the NHL. After Braden Holtby’s departure, the goaltender duties belong to Thatcher Demko. The 6’4” netminder signed a five-year extension back in March after posting a 16-18-1 record with a .915 save percentage last season. Offseason acquisitions for the Canucks include two-time Stanley Cup winning defenseman Luke Schenn and forward Conor Garland from Arizona. Those seeking an unparalled approach at Rogers Arena can start with membership to Club 500. In addition to outstanding sight lines when puck drops, this Penthouse level hot spot offers a VIP entrance, dedicated concierge representatives and in-seat world-class service. For an entertainment experience unlike the rest, the Konica Minolta Champions Club serves an exceptional, all-inclusive rotating food menu in a social atmosphere that’s perfect for networking. Limited spaces remain for their most exclusive and prestigious seats as a private, reserved dining table for six awaits you at the Loge Club.

The Canucks made it through their first year post-Sedin brothers, and now re-tooled Vancouver is looking to work their way back up in the Western Conference under head coach Travis Green.

Defensively, the Canucks are hitching their wagon to Tyler Myers, who was signed to a five-year contract over the offseason, and will join rookie defenseman Quinn Hughes.

Youth permeates the offense, as fans are excited for Elias Pettersson’s second season, after his fruitful rookie season netted 66 points, while 22-year-old Brock Boeser has 116 points over his first two seasons.

Jacob Markstrom and Thatcher Demko are expected to be a solid one-two punch in net.

Rogers Arena features a nearly unlimited amount of premium experiences for Canucks games this year. Suites are available on the 200 and 500 level of the arena, and along with penthouse and executive suites, you can choose the unique Sportsbar Suite, Legends Suite, and Rogers Studio Lounge.

Club 500 access gives you a bird’s eye view of the action, along with all-inclusive food and non-alcoholic drink, in-seat service, a VIP arena entry, private bathrooms, and a discount at the team store. Private dining options are available in the Loge Club, while the Konica Minolta Club gives you the same perks of Club 500, but on the arena’s 200 level. 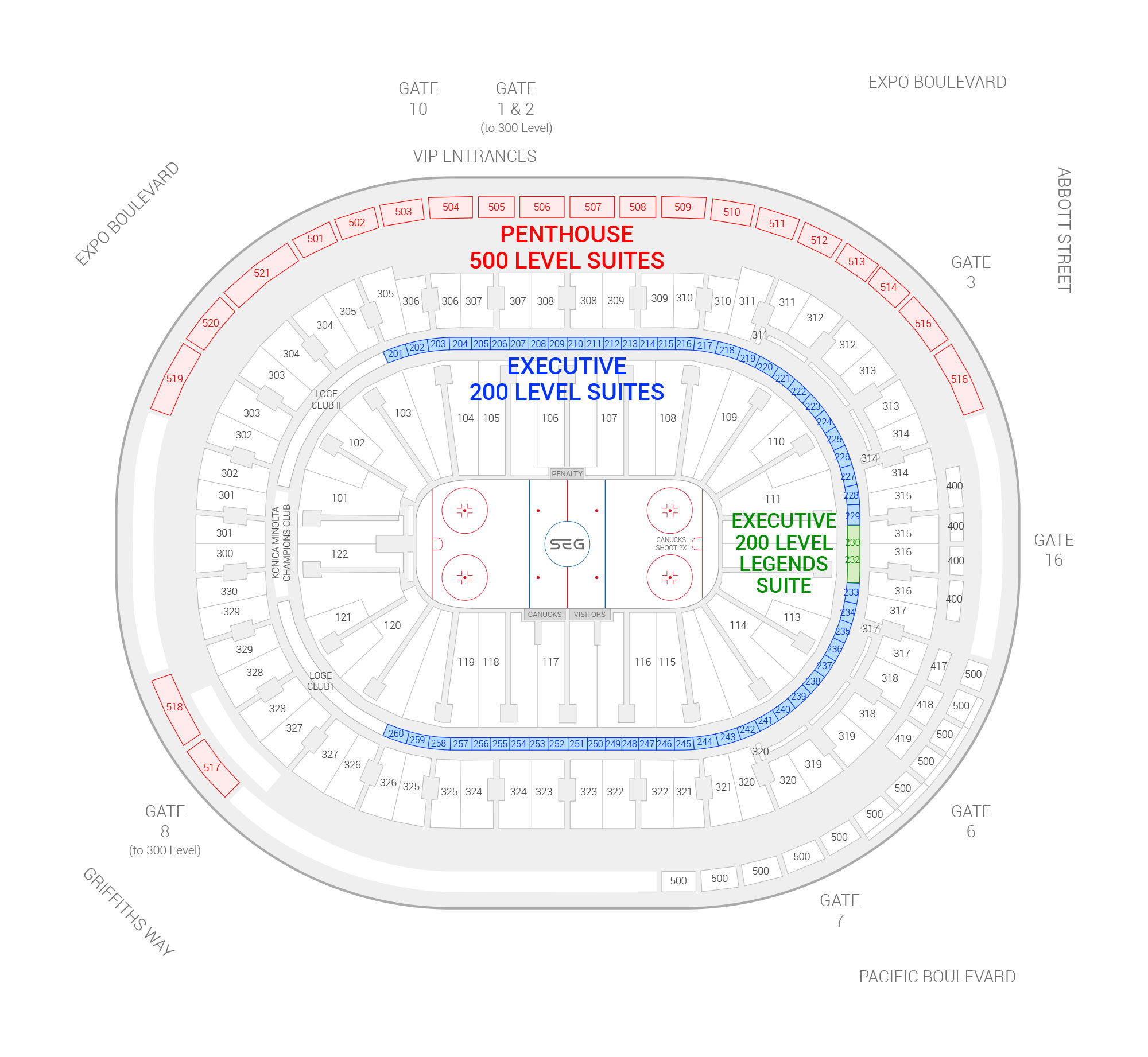 Thank you for signing up for specials at Rogers Arena.

Enter your email address below to stay in touch. We'll sign you up for our newsletter, which will inform you of the latest inventory and events at Rogers Arena. We promise we will never sell or distribute your information.