Sell Your Commanders Suite With Us
UPDATING...

How much do Washington Commanders suites cost?

Washington Commanders suite rentals range in cost from $12,000-$18,000 per game depending on opponent, day of the week, and suite size. Prime-time games at FedEx Field and Washington games versus popular opponents tend to be on the higher end of the spectrum. Pre-season games will cost the least.
Learn More About Suite Pricing

How many guests can fit in a Commanders suite?

Washington Commanders luxury suites at FedEx Field have a general capacity of 12-30 guests. FedEx Field suites come in various sizes and configurations. Most Commanders suites provide a base quantity of suite tickets and the option to purchase additional standing room tickets, if needed.

Executive Suites are the most common suites available at FedEx Field. These suites feature HDTVs, WiFi, interior lounge seating, exterior premium seating, and upscale furnishings along with a dedicated suite attendant. Most Executive suites will accommodate between 18-24 guests. Your group will receive 4 VIP parking passes. Executive Suite ticket-holders will enter through a private gate at FedEx Field and have exclusive access to VIP clubs located throughout the suite level.

To book an Owner's Club Suite

Loge Suites at FedEx field are located on the 5th level along the End Zone. Washington Commanders Loge Suites come with 18 - 33 tickets and offer access to the Club Level and the Ciroc Lounge. Loge suites also include all-inclusive catering.

To book a Loge Suite

FedEx Field luxury suites can fully catered at your own discretion. Most suites won't include food or drinks, so, guests pre-order from the suite menu in advance. On average, clients spend about $100 per person on food and alcohol, however, there is no catering minimum and it is optional.
View More Details
×
Catering Details

Following a suite purchase, you will be provided with the suite menu and necessary order forms to complete your order. A pre-order deadline is typically one week prior to the date of your event. You won't be charged for what you ordered until day of the event. If needed, you can also order food and drinks from the suite through your suite attendant.

There is no formal dress code for the suites at FedEx Field. Most guests will dress casually or in team-branded apparel. If you are attending a Washington Commanders game with a corporate group, check with your host on dress expectations. FedEx Field suites are climate-controlled for your comfort.

FedEx Field and the Washington Commanders adhere to the NFL's standard Clear Bag Policy. Patrons must bring all their items in bags that are clear plastic, vinyl or PVC and do not exceed 12" x 6" x 12." Small clutch bags are permitted. Backpacks, coolers, and computer bags are not permitted.

Children 2 years of age and under do not require a separate ticket for admission into FedEx Field for a Washington Commanders game. Commanders suites can provide a welcomed secure and private environment for groups and families entertaining with younger children.

It’s a brand new era in Washington, as the Commanders were born from the Washington Football Team and take the field for the first time this fall. The big move for Washington was trading for quarterback Carson Wentz, who had success in the NFC East earlier in his career when he played for Philadelphia. Already armed with Terry McLaurin in the first wide receiver spot, the Commanders drafted Jahan Dotson out of Penn State with the No. 16 pick. They also may have scored some value in the long-term QB position with Sam Howell, picked in the fifth round out of North Carolina, and if Wentz struggles, he could see some playing time this year.

It’s a brand new era in Washington, as the Commanders were born from the Washington Football Team and take the field for the first time this fall. The big move for Washington was trading for quarterback Carson Wentz, who had success in the NFC East earlier in his career when he played for Philadelphia. Already armed with Terry McLaurin in the first wide receiver spot, the Commanders drafted Jahan Dotson out of Penn State with the No. 16 pick. They also may have scored some value in the long-term QB position with Sam Howell, picked in the fifth round out of North Carolina, and if Wentz struggles, he could see some playing time this year.

Executive Suites and Owner’s Club Suites at FedEx Field hold anywhere from 12 to 50 guests. Both are climate-controlled, have a private restroom, a private entrance, and a dedicated suite attendant. Owner’s Club Suites come with all-inclusive catering as well. Loge Suites are a more recent addition and give you access to bars and lounges inside with open-air private seating attached.

Washington Football Team emerged as NFC East champions in their first season under Ron Rivera, and they competed well with backup quarterback Taylor Heinicke against Tampa Bay in the first round of the playoffs. Ryan Fitzpatrick was brought in to lead with Heinicke in a backup role for 2021. Antonio Gibson had a solid 2020 at running back and is joined in the backfield by A.J. McKissic, while Terry McLaurin—who had 1,118 receiving yards last year, anchors the wide-receiver group. Defensive Rookie of the Year Chase Young is back to lead a defense that was in the top five in both points allowed and yards allowed last year. For premium seats at FedEx Field, start with the Merrill Lynch Touchdown Club. In addition to the best lower-level seats in the middle of the field, get access to this club with pregame VIP hospitality. Loge suites have complimentary catering and have couch-and-table seating in the stadium itself on the open-air hospitality level. Executive suites are more private, traditional suites and are perfect for larger family or corporate gatherings.

The new name will not be the only thing making its debut in 2020. Dan Snyder is making changes inside and out of the franchise. Washington rolls out a new coaching staff and front office. Head coach Ron Rivera steps in to help turn this team around. Rivera got a big head start when Washington drafted Chase Young with the second overall pick in the 2020 NFL Draft. Rivera’s focus on defense is going to make a big impact on a young squad. With Young, Ryan Kerrigan, Montez Sweat and Jonathan Allen, the Washington Football Team has one of the most dynamic defensive fronts. With the secondary led by Landon Collins and Kendall Fuller, Washington will have one of the best all-around defenses in the NFC East.

FedEx Field features multiple suite levels offering first-class amenities in every luxury box. Washington’s Executive Suites are located on two levels wrapping around the stadium. Most of the suites will hold 18-24 guests. With a Washington suite, guests receive VIP parking and access to a private entrance into FedEx Field. Suites for the Washington Football Team include interior lounge seating, bar stools at a drink rail and stadium-style seating for watching the game. In-suite catering can be arranged in advance, making sure that all of your drinks are on ice and a food buffet is spread throughout the suite. HDTVs, a wet bar, and a dedicated Washington suite attendant are also a plus. 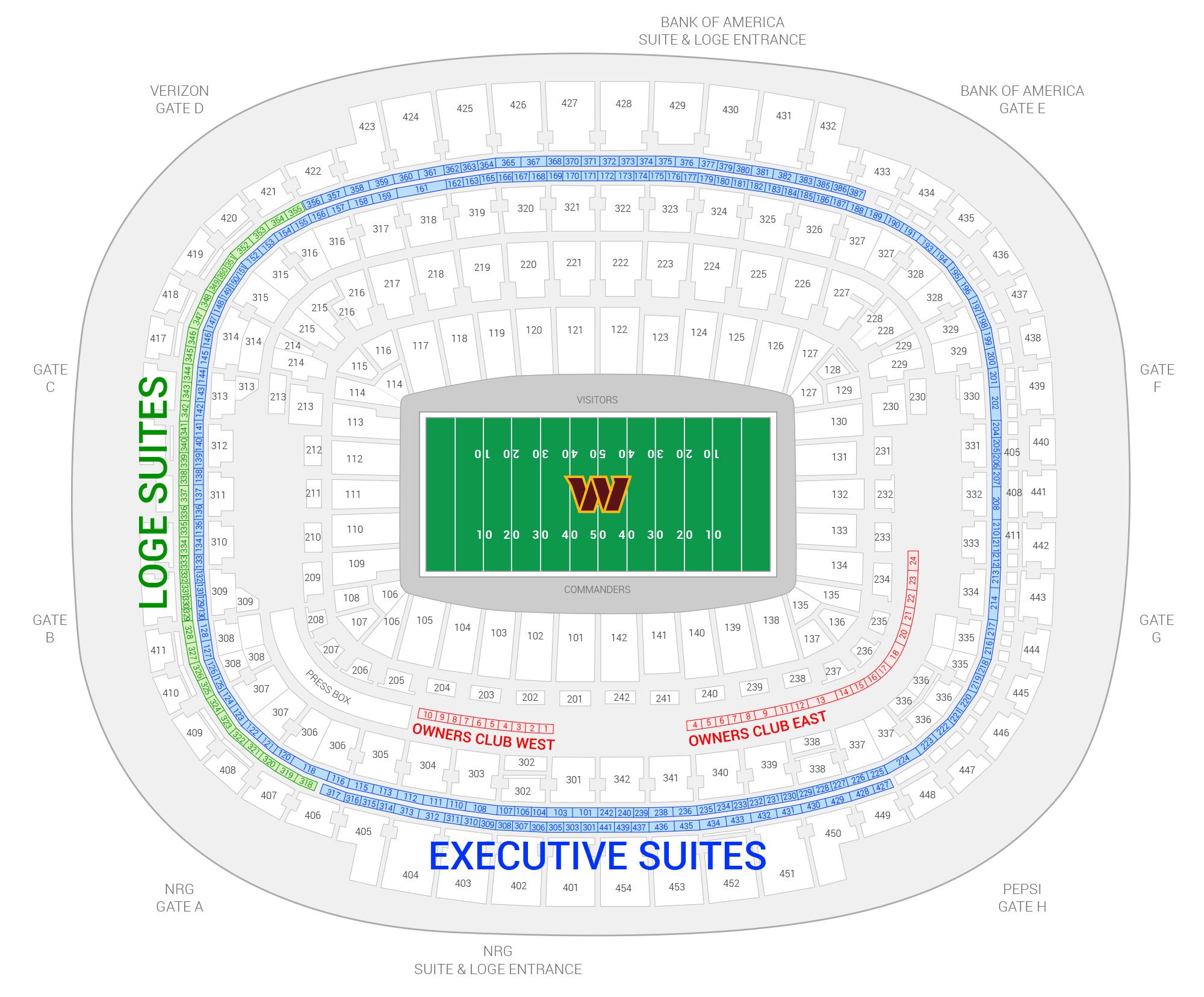 Thank you for signing up for specials at FedEx Field.

Enter your email address below to stay in touch. We'll sign you up for our newsletter, which will inform you of the latest inventory and events at FedEx Field. We promise we will never sell or distribute your information.