Think you need a large group to experience the suite life at Golden 1 Center? Guess again. The Sacramento Kings offer three unique luxury suite options for parties of 4-8 people. Find out which Sacramento Kings premium experience is best for your group: 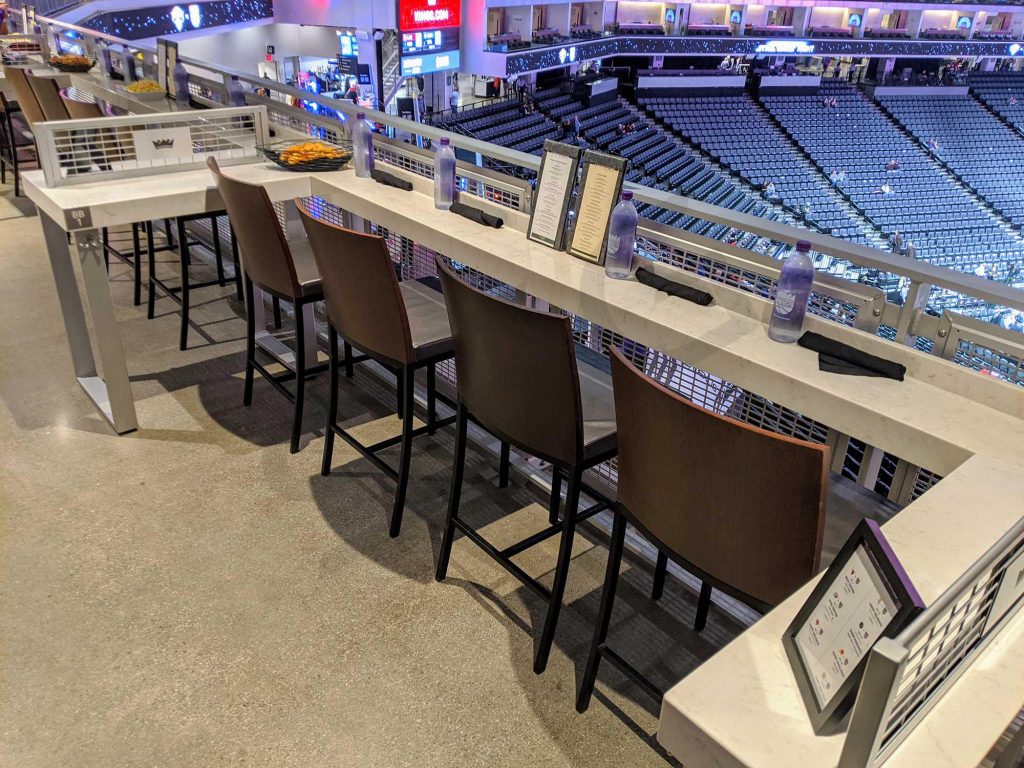 For groups of 4 guests, you cannot beat the all-inclusive Balcony Box for a Sacramento Kings game. The Balcony Boxes stretch the baseline bridge on the North end of the arena. Each box features a drink rail along with your reserved seats. Beer, wine, soft drinks, and appetizers are included with each ticket. A server will be assigned to your box to ensure you are replenished as often as needed. Along with the perks above, each box includes a VIP parking pass making it easy for your group to arrive at and exit the Golden 1 Center. The Balcony Box concourse is private to those with tickets.

If you are looking to stick to budget and get all the suite perks, the Kings Bridge Lofts are loaded with first-class amenities. Located on the main suite level, each loft features four leather seats facing the court with four bar stools directly behind them. An HDTV ensures you will not miss any of the action when you’re up grabbing another bite to eat. With plenty of counter space, guests can pre-order in advance to the game to have their Bridge Loft stocked with their favorite foods, soft drinks, and alcohol. Each Loft is connected to the exclusive Croft Bar. So, if you want to enjoy a handcrafted cocktail, discuss business one-on-one or just experience part of Golden 1 Center not many can, the Bridge Lofts are the perfect fit. Each guest will also receive private entry into the arena. 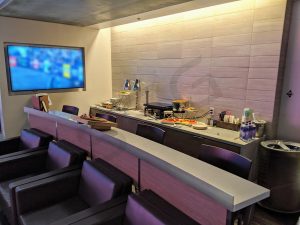 Inside a Kings Loft

For those looking to get as close to the court as you but experience a Kings suite, a Kings Loft is the suite for you. Most Lofts will hold 8-10 guests, making it a perfect size for small gatherings. The Lofts are located on the lower suite level, beneath the larger Kings suites. Each Loft features four plush fixed seats, 4 bar stools and an elongated high-top table. Behind your seats is where you can set up an in-suite buffet by pre-ordering catering in advance to your game. An HDTV is on a wall in every Loft, so you never miss a shot.

How Much Do Sacramento Kings Lofts and Balcony Boxes cost for a single game?

Each option varies in cost with Balcony Boxes being the lease expensive, followed by Bridge Lofts and then Kings Lofts. On average, single game Kings rentals can range from $800-$5,000 for the options mentioned above. Click here to see pricing and availability on all of the suites at Golden 1 Center, including full size Kings Suites and Party Suites, for upcoming Kings games and other events.

A Crown Jewel for California’s Capital City
Posted on August 22, 2016 by Connor Sprague

Only three years ago the Sacramento Kings seemed headed out of California’s capital, but now, thanks to Sacramento mayor Kevin Johnson and Kings owner Vivek Ranadive, the Kings seem set to stay in Sac-town for a very long time. For the first time in ten years, full season and half season ticket plans have completely sold out. For a team that has struggled to fill Sleep Train Arena in the past this is fantastic news. The rises in sales are all thanks to the $507 million dollar Golden 1 Center.  Golden 1 is a technological marvel fit for the capital city of a state that includes both the Silicon Valley and natural wonders like Yosemite and Redwood National Parks. Here’s a rendition of how the Kings new arena will look like when it is finished that was taken from the Kings YouTube page.

Sacramento’s brand new Golden 1 Center is making an effort to become one of the most eco-friendly venues in the entertainment industry.

As part of our series detailing the sporting venues being unveiled this year, we wanted to give Sacramento Kings fans a look into the most technologically advanced and green arena in the NBA. Kings fans are truly in for a treat as Vivek Ranadive’s design team has managed to both highlight Sacramento and create a state-of-the-art entertainment center.

Why is Golden 1 Center the most technologically advanced arena in the NBA and described by Wired Magazine as “A Giant Tesla”?

It is outfitted with over 650 miles of fiber optic cable and a 6,000 square foot data center

The arena can handle 500,000 Snapchats per second and it is conceivable that Golden 1 will be easily handle anything that mobile devices can throw at it for the next 10 to 20 years. There is also cell coverage no matter where you are in the building.

Golden 1 Center is a SMART building

It knows everything that is transpiring on the premises. Golden 1 can send fans score updates when they’re getting food, tell fans which bathroom has the shortest line or deliver a deal code to fans when they’re in line at concessions.

Golden 1 Center has its own app

The app permits fans to have the easiest gameday experience possible from getting to the game to ordering concessions. Golden 1’s app enables fans to purchase tickets and parking online and then gives fans directions to their parking spot and seat. Another cool feature of the app is that it allows fans to buy anything from a hot dog to a foam finger from the comfort of their seat.

Kings fans should be thrilled with their new arena, which has definitely delivered on its promise of bringing the ultimate modern gameday experience. A jewel amidst picturesque downtown Sacramento, Golden 1 Center should bring vitality and excitement to California’s capital city.

Sports fans should stay tuned to the Suite Experience Group’s Blog as the summer progresses. We will be examining all of the new arenas opening up around the NHL, NFL, MLB and NBA this year. The next venue in our series will be the Detroit Red Wings Little Caesar’s Arena, which opens in 2017 and will feature very innovative seating options.

*Information from Wired Magazine and Amplify Magazine used in this post