A Crown Jewel for California’s Capital City
Posted on August 22, 2016 by Connor Sprague

Only three years ago the Sacramento Kings seemed headed out of California’s capital, but now, thanks to Sacramento mayor Kevin Johnson and Kings owner Vivek Ranadive, the Kings seem set to stay in Sac-town for a very long time. For the first time in ten years, full season and half season ticket plans have completely sold out. For a team that has struggled to fill Sleep Train Arena in the past this is fantastic news. The rises in sales are all thanks to the $507 million dollar Golden 1 Center.  Golden 1 is a technological marvel fit for the capital city of a state that includes both the Silicon Valley and natural wonders like Yosemite and Redwood National Parks. Here’s a rendition of how the Kings new arena will look like when it is finished that was taken from the Kings YouTube page.

Sacramento’s brand new Golden 1 Center is making an effort to become one of the most eco-friendly venues in the entertainment industry.

As part of our series detailing the sporting venues being unveiled this year, we wanted to give Sacramento Kings fans a look into the most technologically advanced and green arena in the NBA. Kings fans are truly in for a treat as Vivek Ranadive’s design team has managed to both highlight Sacramento and create a state-of-the-art entertainment center.

Why is Golden 1 Center the most technologically advanced arena in the NBA and described by Wired Magazine as “A Giant Tesla”?

It is outfitted with over 650 miles of fiber optic cable and a 6,000 square foot data center

The arena can handle 500,000 Snapchats per second and it is conceivable that Golden 1 will be easily handle anything that mobile devices can throw at it for the next 10 to 20 years. There is also cell coverage no matter where you are in the building.

Golden 1 Center is a SMART building

It knows everything that is transpiring on the premises. Golden 1 can send fans score updates when they’re getting food, tell fans which bathroom has the shortest line or deliver a deal code to fans when they’re in line at concessions.

Golden 1 Center has its own app

The app permits fans to have the easiest gameday experience possible from getting to the game to ordering concessions. Golden 1’s app enables fans to purchase tickets and parking online and then gives fans directions to their parking spot and seat. Another cool feature of the app is that it allows fans to buy anything from a hot dog to a foam finger from the comfort of their seat.

Kings fans should be thrilled with their new arena, which has definitely delivered on its promise of bringing the ultimate modern gameday experience. A jewel amidst picturesque downtown Sacramento, Golden 1 Center should bring vitality and excitement to California’s capital city.

Sports fans should stay tuned to the Suite Experience Group’s Blog as the summer progresses. We will be examining all of the new arenas opening up around the NHL, NFL, MLB and NBA this year. The next venue in our series will be the Detroit Red Wings Little Caesar’s Arena, which opens in 2017 and will feature very innovative seating options.

*Information from Wired Magazine and Amplify Magazine used in this post

Great news to start the weekend: the return of college football is now officially 2 weeks away. And if you’re not already totally amped for the season, well…

For starters, give this a try: College Football HYPE Video 2016.

Opening weekend is LOADED with marquee match-ups. Here’s your annual CFB primer highlighting the must-watch games of opening weekend along with our shortlist of some elite athletes who are well worth the price of admission (preferably in a suite) in 2016-17:

Evoking physical comparisons to Julius Peppers, Mario Williams, and Jadeveon Clowney, Texas A&M defensive end, Myles Garrett, is an elite talent with game-changing potential. Garrett is freakishly built and has the football IQ to match. He plays with impressive fluidity and a non-stop motor. Although only a junior, Garret has the complete skillset of a three-down defensive end who can rush the passer and stop the run. With room to bulk up, scouts anticipate Garrett can grow into another 10-15 lbs. of muscle before entering the NFL. Garrett has a markedly quick first step off the edge – perhaps the most important skill for a 4-3 defensive end. Although Garrett has been productive as an underclassman, he was overshadowed by the likes of former CFB defensive stars Jadaveon Clowney and Khalil Mack. Look for Garrett to be SEC Defensive POY and a legitimate top 5 pick come the 2017 NFL Draft.

2,000 yard passer, 1,000 yard rusher and 38 combined touchdowns in 2015. Even if we told you he was the QB of the 8th ranked team in the country, not many people would guess it was Houston QB, Greg Ward Jr. Perhaps due to Ward’s unassuming demeanor or maybe his smaller stature, Ward Jr.’s talent has gone underappreciated. Ward Jr. is a true dual-threat. He can run and throw; he’s the modern athlete playing the quarterback position. Heck, put Ward Jr. at cornerback and he would probably be above-average. Ward Jr. has electric natural ability and, as a converted wide receiver, he is just now starting to feel comfortable reading defenses. Ward’s game should finally get national recognition this year as the Houston Cougars open the season ranked 8th in both the USA Today and Coaches polls.

OJ Howard’s production didn’t quite corroborate his physical attributes. Then the 2016 National Championship happened. Howard caught 8 passes for 205 yards and 2 touchdowns. Howard is a fluid athlete with wide receiver speed in a tight end frame. He is rangy and explosive with strong hands. Howard has a tremendous catch radius. One more year of refined route running should cement him as a first round pick come next year’s draft. Howard, now a senior, will be a top offensive weapon for Alabama’s offense. You heard it here – this is the year Howard puts it all together as a 1,000 yard receiver and red zone touchdown machine.

Ron Dayne. Montee Ball. Melvin Gordon. Corey Clement? Clement was supposed to have his breakout season last year as a junior, but he struggled through injuries and missed plenty of games. While some expected Clement to declare for the NFL draft, he instead opted to return to Madison to attend to unfinished business. In a run-heavy offense, Clement will be the focal point. Running behind one of the nation’s best offensive lines, we think Clement is a legitimate Big Ten Offensive POY candidate and Heisman contender. Clement has the ideal frame to withstand running between the tackles while possessing enough burst to make defenders miss on the outside. Expect some huge games from Clement in 2016-17 as the Wisconsin running back tradition continues. 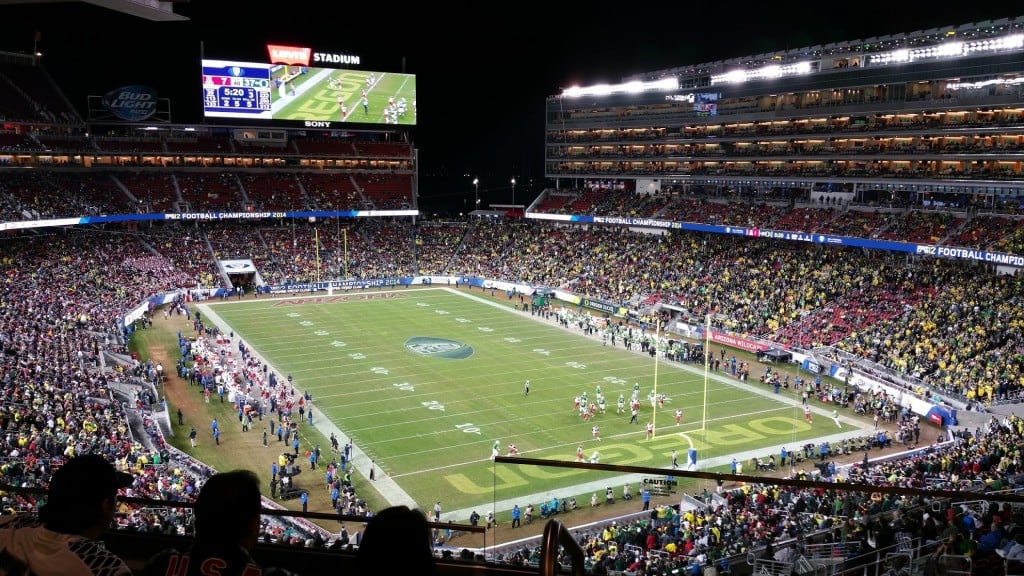 The Oregon Ducks defeated the Arizona Wildcats in the 2014 Pac-12 Championship at Levi’s Stadium in Santa Clara, CA. 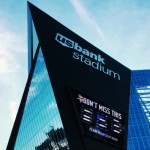 As the 2016 NFL season draws closer, many industry experts will be focused on the land of a thousand lakes and the Minnesota Vikings’ new stadium in Minneapolis – U.S. Bank Stadium. The brand new stadium exemplifies a trend of big time investment in venues across the sports industry, but especially in the National Football League. Forbes has predicted that the NFL will generate over $13 billion dollars in revenue in 2016. While $13 billion in revenue is quite an impressive number, perhaps the most significant indicator of the health of the NFL brand is the number of multi-billion dollar stadiums under proposal or currently being constructed.

In our series on new sporting venues across the major North American sports leagues, we will be examining what is unique about each venue and what amenities and features these massive investments are providing in-stadium fans. Since the 2016 NFL season will be U.S. Bank Stadium’s inaugural one, our first post will give Vikings fans a little taste of what the Metrodome’s replacement has to offer. 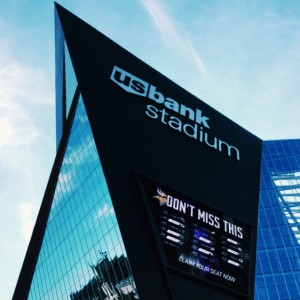 The front of U.S. Bank Stadium is designed to look like the prow of a viking longship.

How does it compare to the old Metrodome?

It is safe to say that fans of the Purple People Eaters will be extremely entertained in their swanky new stadium: there is truly an experience for everyone.

Sports fans should stay tuned to the Suite Experience Group’s Blog as the summer progresses. We will be examining all of the new arenas opening up around the NHL, NFL, MLB and NBA this year. The next venue in our series will be the NBA’s most technologically advanced and environmentally friendly arena, the Sacramento King’s Golden 1 Center.

As always if you’re looking to buy a luxury suite, check out our website.